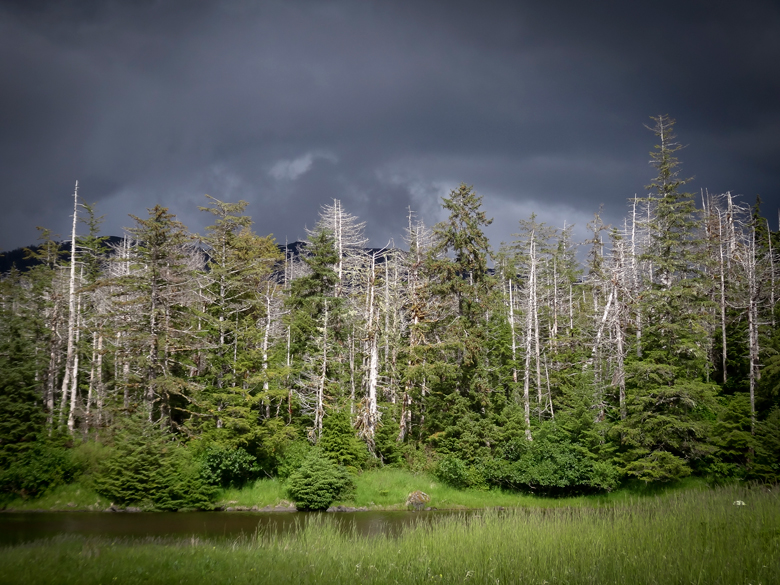 I wasn’t prepared to be changed by a book on the dieback of yellow cedars in southeast Alaska. But that’s how God changes us – in completely unexpected ways. Several years ago I found myself reading Mary Jo Leddy, Leanne Betasamosake Simpson, Lauren E. Oakes and Simone Weil. Collectively, the Spirit was using their writing to address my own discouragement and questions about the Euro-tribal church I am a part of.

Oakes wrote In Search of the Canary Tree out of her experiences as a young Ph.D. researcher between 2010-2016. She was examining the reasons why yellow cedars were dying so rapidly in Alaska. Her assumption was that the causes were not to be found in overlogging but in the rapid progression of climate change in the far north. Her research revealed that the yellow cedar, a central part of the ecology and economy of people living in that part of Alaska, was like a canary in a coal mine – an early warning system of impending crisis. 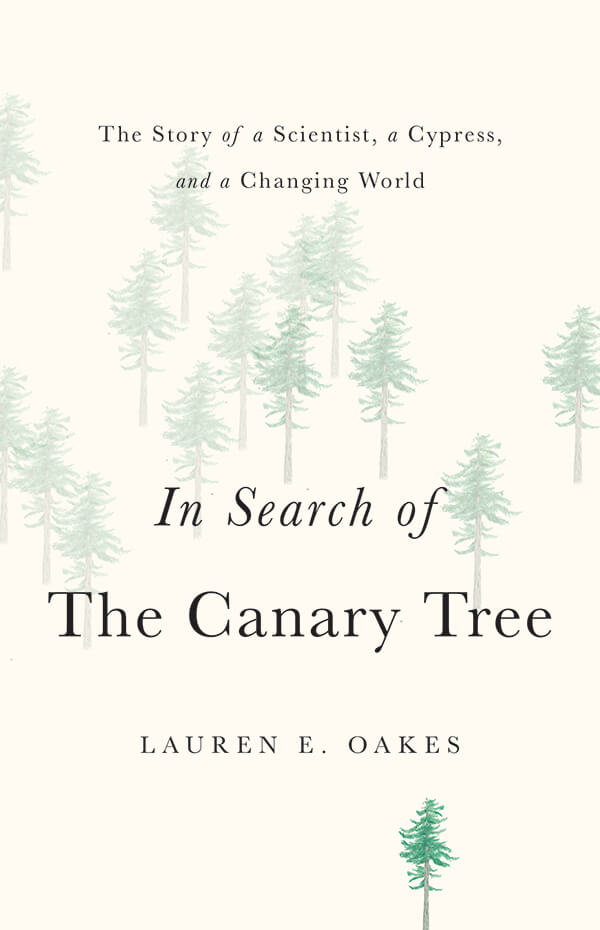 Oakes’ book engages two themes: analysis and story. As a research scientist, she brought to her work all the tools of good research to analyze what was happening to the cedars. This involved arduous months in the bush, marking trees, setting up sensors, gathering a mound of data then spending months pouring through her data to shape conclusions. The analysis of that data revealed the crisis of climate change. Her results were daunting, producing in the young researcher a profound sense of hopelessness. From the perspective of the science, there was no hope. Nothing could be done to stop or reverse the fact that climate change was devastating the yellow cedar and, therefore, the ecosystem around which it thrived. The second part of her work involved her listening to the people in the communities around that part of Alaska. This part of her research involved listening to the stories of people whose lives were shaped in relation to the yellow cedar and the larger questions of climate change. This part of her work brought her into contact with settlers and indigenous peoples, loggers, store keepers and weavers.

Part of what Oakes’ book is wrestling with is the question of hope. Where does one find hope in the midst of facts that are overwhelmingly bad? The research side of her was struggling to get a sense of where, in Leanne Simpson’s language, there might be resilience. Because I had been reading both of these books, I saw that Oakes was discovering resilience in the same places Simpson was in her book – in the stories of people on the ground. One can hear the voices of resilience, voices that spoke about hope in unexpected places and among unexpected people. The stories she heard were not of a naive, romantic hope yearning for return. The stories Lauren E. Oakes recorded did not change the data or gloss over stark facts related to climate change. But in these stories, the research scientist unexpectedly discovered how ordinary people, when confronted with unchangeable change, find pathways of hope to engage an unknown future. Like the resilience Leanne Simpson describes in her book, this hope gestates in the deep roots of communities and their traditions. It comes from the reality of people situated in a place. Hope comes because place and land and trees are not commodities or real estate or harvests but part of the way life is woven together through tradition and belonging. What these stories hint at is the reweaving of our lives that Mary Jo Leddy writes about in her book. In many of the stories, people could not explain the “science” of dying cedars or the facts of climate change. But they have these other stories. They have elders who can tell stories of the tradition. (As the elders of the Biblical tradition constantly remind us in times of crisis and unraveling “…our father was a wandering Aramean and God.”) They have the rhythms of community and the knowledge that they indwell a place with history and story. These were elements Oakes recognized were the deep wells from which ordinary people bring forth hope and resilience.

At one level all of this seems obvious. Of course, one would say, people’s stories are important and we really need to pay attention to them if we are to lead well. Of course, place and tradition are critical and we really need to attend to each if we are to lead well. But this, at least for me, has not been the way I had seen the sources of hope. Next week I want to write about the fourth woman whose writing challenged and changed my mind about where we are as Euro-tribal churches and what needs to happen if we are to heed the Spirit and engage the unraveling. Simone Weil, writing in the late 1930s and into the 40s, described the overwhelming presence of the machine. I want to describe this in the next post because my observation is that we aren’t, as leaders, guided by the resilient imagination of the Holy Spirit in the stories of our people because we have been colonized and are shaped by Weil’s machine. In the unraveling of modernity’s wager and all the anxiety it’s producing, we have been colonized by the promise of data to give us answers, we’re driven by reams of research enumerating all the churches that will close (and they will), about the precipitous decline of people adhering to the Christian imagination, about the nones and dones and whatever new cute phrase someone comes up with on social media and we lose hope.

With this sense of hopelessness, we are driven to ask what can be done. Where are the solutions and fixes? Who out there has the program, the new method, the technique? But inside this world of data, method and technique there is no hope. The more research and the more data we get, the more we cast around for the new method (today this is focused on church planting and a return to the “neighbourhood”) to turn things around. But the more we travel down this path of believing that out there somewhere, in some method, technique, strategy or asset-based analysis lies the answer, the less we are able to hear or see that the Spirit is doing something completely different. In the quiet, off stage stories of ordinary people, the Spirit is reweaving the kingdom beyond the imagination or capacities of most leaders and church organizational systems. As I read Leddy, Simpson and Oakes I saw that, for me, even after so many years of experience, I was still operating inside assumptions about the sources of hope and becoming increasingly discouraged. It was hard for me to see that, despite all my good analysis, I was driven by the very methods of technical rationality that I critiqued in my earlier book Joining God (2015). It was a discouragement that had made me almost give up on the missional movement in North America. What these four women did was offer me new eyes through which to understand what Lesslie Newbiigin had been pointing to in his writing. I started to see this other way rooted in the stories of people in the local. This is what I want to pick up on in the next post when I reflect upon the fourth woman I had been reading, Simone Weil.

I was learning, all over again, that the job of leadership isn’t coming up with answers, vision proposals, programs or big initiatives. The leader’s role is very different. Lauren Oakes shares a story she received that captures this. While the starkness of her scientific analysis didn’t change, being with the people of these Alaskan communities was turning her away from an overwhelming hopelessness to a space of faith to act in addressing this future. She tells a story shared with her by two native weavers for whom yellow cedar thread is an essential part of their materials – Ernestine and her niece, Cathy. Ernestine is Tlingit and her traditional name is Kasyyahgei. She has little context for understanding climate change. She knows the yellow cedars aren’t thriving but attributes it to logging by settlers. For her, the trees are not “resources” – a product to be used in the fabrication of some commodity or goods for market. When asked what the yellow cedars meant to them, she told Oakes a story her father told her about a man from another village:

This is the task of leadership. But it involves far more than I had imagined.