There are moments in our lives when we encounter people who, through a story they share or a picture they paint, reorient our sense of the world. Over these last five posts, I’ve shared how this experience came to me through four amazing women writers. Five years after writing Joining God (2015), I’d become less and less convinced that the missional conversation had anything left to say to the unraveling of the Euro-tribal church. Lesslie Newbigin’s assessments of the Gospel in the pluralist societies of the West had made little difference to the practices of these churches. In this place of discouragement, the Spirit encountered me through the writing of these four women. I share this in my new book Joining God in the Great Unraveling (2021).

In my last post, I described the task of leadership in terms of “learning to hold hands,” concluding with the observation that this involves far more than I had ever imagined. I want to share why this leadership is hard by introducing my fourth critical interlocutor, Simone Weil. An enigmatic figure from the first half of the twentieth century, her prescient voice saw what was happening to the modern West and its great wager on life without God. The accumulated voices of Mary Jo Leddy, Leanne Betasamosake Simpson, and Lauren E. Oakes had tilled the ground for me to hear Weil in new ways. She was clarifying for me why it’s so hard for the Euro-tribal churches to grasp what’s at stake in the great unraveling. Weil explains this through two images: technique and roots. We have to understand what has happened to us through each of these to grasp our crisis and comprehend the high cost of the resurgence God’s Spirit is calling us to embrace. 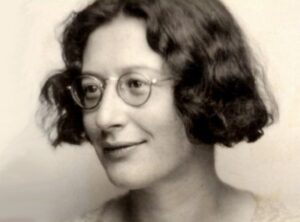 Weil[1]This is not the place to introduce a detailed look at Weil’s thought (one can catch some of that in these places: Robert Zaretsky, The Subversive Simone Weil, A Life in Five Ideas; John Hellman, … Continue reading was a towering intellect of the 20th century. She died, ravaged with tuberculosis, because she would not eat more than her own people in occupied France. A philosopher and mystic from a secular European Jewish heritage, she embraced Christian faith through Catholic practices but was never baptized or joined the church. Weil was never an armchair, coffee shop thinker. She lived and worked with ordinary working class people. While teaching philosophy, she worked on a factory line, toiled among coal miners experiencing the new pneumatic drills, and did a stint in fishing boats. At one point she fought in the Spanish Civil War. Her writing came out of her living with working people. She saw the world in ways few of her contemporaries could imagine, bequeathing to us the possibility of reimagining our relationship with modernity. Her language of technique and roots helped me see what’s at stake for a resurgence of the Euro-tribal churches.

The perspective of the early part of the 20th century was clashing ideologies – communism, fascism, democracy or capitalism in their many iterations – competing for ascendancy through nation states. Interpretations of what modernity was doing to people were based on these ideologies. Weil pointed in a radically different direction. She saw that, despite their differing claims, these ideological systems all treated working people the same way. She pointed out how the new technologies were used among working people across these different ideologies. Take, for example, coal mines where pneumatic drills had become a primary technology. For Weil, the question of the meaning of the pneumatic drill wasn’t a theoretical debate filtered through the perspective of a specific ideology (communist, fascist, democratic or capitalist). Grounded experience caused her to see that the problems faced by miners using air hammers were exactly the same everywhere no matter what the ideological grounding of a nation state. For her, it was clear that the claims of radical, ontological difference and value between these ideologies were false because each of these systems, in fact, dealt with their workers and the use of technology in exactly the same ways. Capitalism, socialism, fascism, communism or democracy were not, she concluded, the real basis upon which modern societies were operating. The ideologies weren’t the real revolutionary forces shaping the modern era. Something more fundamental was at work.

Weil offered a different interpretation of the forces shaping the modern West. It is an interpretation echoed in the later work of Jacques Ellul. Though her analysis is submerged under the utopian waves of a technological (digital) society (mostly trumpeted by technocratic elites who bought the notion of technology as progress), her analysis is crucial to addressing the crisis confronting us. For Weil, the true revolution of modernity is the emergence of cadres of bureaucratic elites within overarching technocratic societies. This revolution created an expanding cadre of professionals and experts who, by the very nature of their training and certification, control knowledge and have the techniques (expertise) to manage and order all of life.

This is what clergy have become right across the Euro-tribal churches. For Weil, our malaise lies in the ubiquitousness of technocratic managers and professionals overseeing and controlling every aspect of life. The technocratic elites – whether in communist, fascist, or capitalist nations – are the oppressors.

This revolutionary oppression took full-blown shape by the mid twentieth century. It continues. The professionalization of clergy (the world into which I was colonized through university, seminary, and ordination into a denominational brand) created the very kind of elites who manage and direct congregations. The technocratic revolution lives at the core of the Euro-tribal churches as a fundamental colonization. It is a clergy industry that is utterly incapable of addressing the great unraveling. Our churches are colonized and commodified with endless techniques that have little connection with a tradition that draws upon habits of discernment, place, prayer and relationship. In the context of Weil’s analysis, I saw that these churches created their own industry for developing the very elites she named as part of the core crisis of our time – a clergy industry of religious technocratic elites. Those ordained colonize the imagination and practices of congregations with their own internal language world for identification (“ministry”, “doctor” “missional”, “pastor”) and external language for activities (adaptive, technical, innovative, strategic, therapeutic, social activist and so forth) and around it all, they wrap their own forms of certification and professionalization. Weil would point beyond these colonizations to something very different. Here we need to look at her second critical observation about the modern project – its destruction of all roots.

We need roots. For Weil, roots happen when we have real, active participation in the life of a community that has tradition and continuity. Weil did not buy into the universalizing ideologies of Nazism, Communism or Capitalism. She read these as the inexorable objectification of everyone and all things in the name of ideology. She recognized that here lay the causes of the 20th century’s genocides. It always became about making everyone like us because we had the universal truth. But, she knew, when a society comes to this point, then those who don’t fit into the narrative, the others, are objectified and killed.

All of us in modernity are uprooted. This is now our dysfunctional norm. I cannot name the times when others tell me neighbourhood is an outmoded term or that reweaving the roots of belonging (holding hands together) is a waste of time. But I see how congregations can turn neighbourhood into a technique for growth. In this rootlessness, we now only know how to privilege one story – the self-determining, consuming individual. We have produced a ghost-like Christianity that gives this story to people with Jesus attached. Beneath all this, for Weil, lies our relentless uprooting from place, accountability, and one another, to the point where any sense of weaving roots (holding hands) seems just a naive dream from a lost time. It is this modern uprootedness that has caused the crisis of our moment. What she saw, looking at the history of Western colonizations, was that the white race, uprooted from itself, uprooted everywhere they went until there was hardly a past or tradition to be remembered. Surely, this is why Leanne Betasamosake Simpson argued so clearly for the resurgence of her people’s stories and traditions around place and land. Only rootedness in place, land and tradition can reweave the tattered threads of a common life.

This is where the Spirit is calling out to the Euro-tribal churches. Technique and its elites cannot save us. The need for root is profound. I am reminded of a comment made by James Baldwin when he described the kind of rootless condition that Euro-tribal colonizations had produced among other peoples. He said that before the Europeans could eat the world, they had to eat themselves. We are colonized by the very rootless colonizations we visited on so many others. If Simone Weil is even close to the truth, then we are confronted with a huge task of embracing another way.